The Middle Passage endeavor ended in 1999, and by the next year Pinkney was back at sea, this time as master of Amistad, a replica commissioned by Mystic Seaport of the 77-foot topsail schooner that in 1839 was taken over by the Africans it was transporting to slavery, who were later successfully defended in court by John Quincy Adams.

Pinkney sailed Amistad in voyages to Portugal, Spain, Sierra Leone and Cuba before he “retired” in 2010 and moved to Puerto Rico. Quotation marks are used because his idea of retirement was to go into the charter business with a 40-foot sailboat he skippered on frequent trips from Puerto Rico to the BVI and U.S. Virgin Islands.

Pinkney was an old hand at sailing those routes. After being discharged from the Navy, he learned how to sail as a crewman on bumboats carrying freight from Puerto Rico to St. Thomas and other ports.

Years later and well into a business career in Chicago, he revived the love of sailing acquired on those rough-hewn island-trading sailboats. He lived across Lake Shore Drive from Belmont Harbor and, he recalled, would “walk the docks waiting for someone to invite me to go sailing.” Someone—the owner of a Chicago taxicab company—did, and soon Pinkney was sailing in Mackinac races on a Swan 44. He also sailed in doublehanded races on Lake Michigan with the ocean adventure sailor Steve Pettingill. The seed that grew into a Hall of Fame sailing career was planted.

Today, at a hearty 86, Pinkney is busy writing a children’s book about his sailing adve

George Washington slept here.” That boast is painted or carved on antiqued signs on dozens of ancient houses in the state of New York. (It has been said that our first president really slept around.)

“Abe Lincoln slept here.” He really did, in a house that still stands three blocks from SAILING’s headquarters. Historians have confirmed that Abe walked the 25 miles from Milwaukee to Port Washington in 1835 and stayed at the home of the colorfully named town founder Wooster Harrison.

“Bill Pinkney slept here.” My daughter Erin, who happens to be the editor of this magazine, enjoys making a cheerful mention of that factoid occasionally when she visits our home and the bedroom that used to be hers. Pinkney paid a visit a couple of decades ago while Erin was off honing her journalism career at daily newspapers and we put him up in her old bedroom.

I’m not implying that Pinkney belongs in the same neighborhood as those aforementioned giants of American history. For one thing, he’s not history yet; he’s alive and going strong. And he is only a sailor, not a legendary leader of a struggling nation

Only a sailor? That doesn’t sound right.  He is a remarkable sailor, who stands out among sailors as one who dedicated his sailing passion and skills to a higher cause than recreational enjoyment, competitive success or fame

Bill Pinkney was inducted into the National Sailing Hall of Fame in 2021. When I mentioned that to a sailing friend, she said, “What, just now? He should have been given that honor years ago.”

Among the Hall of Fame induction accolades, it was mentioned that Pinkney was the first African American to sail alone around the world. That’s true with a qualifier—he was the first African American to circumnavigate via the five great capes. But Pinkney was never interested in making a point about a Black sailor accomplishing the feat, because he knew it was no big deal for a member of his race to excel at sailing.

Explaining that African Americans were key contributors to America’s maritime history, he once told me, “In the Revolutionary War, almost all of the pilots were slaves because they were watermen. Blacks were captains, mates, even ship owners. They were our best sailors. How the hell do you think people got up and down the west coast of Africa? They didn’t take a bus.”

For his part in maritime history, Pinkney might claim other firsts, though they’re not documented by the Guinness World Records. Such as the first limbo dancer, X-ray technician, elevator mechanic, U.S. Navy hospital corpsman and beauty school graduate to sail alone around the world.

That’s just the short version of Pinkney’s eclectic working life leading up to his sailing exploits. About that beauty school, yes, he did graduate, and then parlayed that into a job as makeup artist for such entertainers as Red Buttons and Roberta Flack and later was recruited by Revlon and became the company’s first Black executive.

Pinkney was well into his sixth decade when sailing took over his already crowded curriculum vitae. In 1990, he embarked from Boston alone on a Valiant 47 and sailed around the world on the southerly route, which included rounding the cape that accounts for the gold earring he wears, the old sailors’ badge of a Cape Horn veteran.

More than an adventure, the circumnavigation was a mission signified by the name on the transom of his boat—Commitment—to show inner city children, kids like he was when he grew up in a single-parent home in a south-side Chicago neighborhood, that, in his words “you can reach goals if you pay the price.” In his case, he said, the price was “solitude, fear, perseverance and disappointment.”

More than 30,000 children sailed with him vicariously through video he sent by satellite to school computers. The edited footage became a Peabody award-winning television documentary titled “The Incredible Voyage of Bill Pinkney” and aired on PBS, National Geographic and Disney channels.

The next time he went to sea on a mission, he had 24 teachers on board with him on an 85-foot ketch, along with some half a million middle school and high school students who followed him in lessons beamed from the boat. The project was named the Middle Passage Voyage after the course the boat sailed, the infamous slave route from Senegal in West Africa to Mantanzas, Cuba, from where the captives were dispersed to be sold at U.S. and Caribbean ports.

Pinkney sailed that course in the wake of his forebears. “My grandfather was born in 1870,” he said. “The generations of my ancestors before him were slaves.”ntures, adding the Middle Passage and Amistad years to his autobiography, which is titled As Long as It Takes, and producing sailing videos.

“As long as I can swing my feet over the gunwale, I’m going to keep going,” he assured me.

And I’m thinking that in the interest of memorializing a historic event I might erect a discreet sign at my house with four words and a bit of nautical art. You know what it will say. 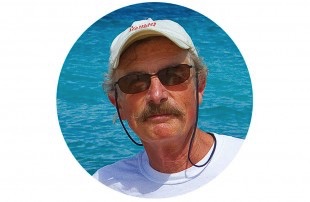